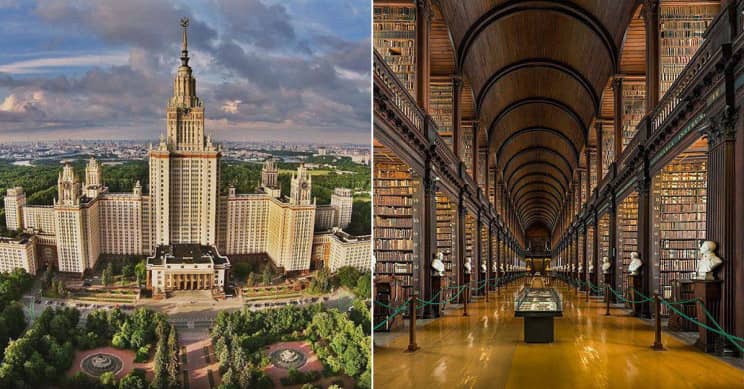 The main building of this university is considered to be one of the most stunning university buildings in the world. It was designed by Lev Vladimirovich Rudnev and was completed in 1953. At the time of its completion, it was the seventh-tallest skyscraper in the world and the tallest outside of New York. The university campus that it resides in has an area of about 1.6 square kilometers.

This was designed by Tange Associates and is considered one of the most amazing university buildings. It was nicknamed ‘The Giant Cocoon’ for obvious reasons and is the seventeenth-tallest building in Tokyo. It is also the second-tallest university building in the world and has won the 2008 Skyscraper of the Year by Emporis as well.

This particular one also serves as one of the examples of truly magnificent university buildings. It was built in the neo-Renaissance architecture style and is situated in the Latin quarter of the city of Paris. The building and its campuses were among the first universities in the world, and it has become a renowned center of learning. Marie and Pierre Curie and Thomas Aquinas are among the alumni of this university.

It was used to form part of the Sapienza University of Rome. It is among the oldest universities of the world and was founded way back in 1303 by Pope Boniface VIII. The church, however, was built between 1642 and 1660. It was designed by the renowned architect Francesco Borromini.