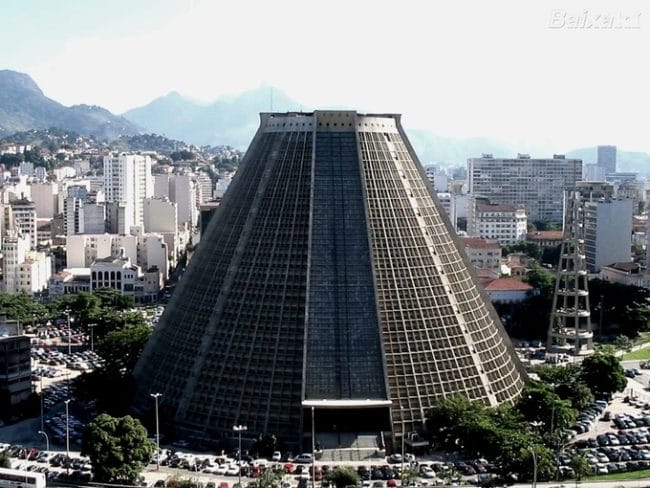 Are you an evil supervillain in dire need of a lair? Then look no further, as we have collected the ten most evil looking buildings money could buy! So if you want to hatch a diabolical plan to take over the world, this might be the place to be.

This building is located in an open-air French mall and is divided into four districts (Home & Garden, Lifestyle, Premium, and The Designer Gallery). It is a 22 meters (72 ft.) building and is also known as “Guetteur” which translated to English means “the lookout.” The Polygone Riviera opened in Cagnes-sur-Mer late October 2015 and took 3 years of construction. It is the first ever outdoor shopping and leisure center in France. MahaNakhon is a luxury multi-purpose skyscraper in the Silom/Sathon central business district of Bangkok, Thailand. It was opened in late August 2016. The building’s “pixelated” appearance gives an illusion that the building is falling apart and is the tallest building in Thailand rising at 314.2 meters (1,031 ft), with 77 floors. Excuse me, is this the Batcave?

This cool “lair” is located in central Stockholm is the headquarters of Bahnhof, which is a Swedish Internet Service Provider (ISP) and data centers. The place gained notoriety as the former home of Wikileaks, and a former nuclear bunker during the Cold War. Everything is creepy, from a stable for laboratory horses to a cremation facility for lab animals, who builds this sort of stuff? This is a naval fortress created on an artificial island in the Gulf of Finland near St. Petersburg and Kronstadt. In 1899–1917 it was used as a research facility for the Plague and other bacterial diseases, and reportedly a couple of people even died here while doing the research. This is the House-Monument of the Bulgarian Communist Party, also known as the Buzludzha Monument. The Bulgarian communist regime built it in commemoration of the events in 1891 where a group of socialists under the lead of Dimitar Blagoev secretly started an organized socialist movement which eventually led to the founding of the Bulgarian Social Democratic Party. Sauron is that you??

The Chruch was constructed long before the end of communist government in Hungary. Its unusual facade divided the people, with some not approving of the innovation, while others adoring it for being one of the symbols of Paks. As Imre Makovecz, the architect said,

“The goal of an architect is to link the world, to connect the up and the down and the deep betweeen. One has to be able to link the earth with the sky” Philadelphia City Hall is located at 1 Penn Square and is the office of government for the city of Philadelphia. The building rises to 548 ft (167 m) and has the statue of city founder William Penn on top of it. It held the accolade of being the tallest building in the world from 1894 to 1908. As spooky as it might seem, this is one of the most prominent research universities in Berlin, Germany. It’s internationally famous for excelling in the field of humanities, as well as natural and life sciences. DC Tower 1 is the tallest building in Austria, rising 220 meters high (250 meters including the antenna spire). The building has a rooftop restaurant, and the first 15 floors have a four-star hotel operated by the Spanish Sol Meliá Group. How cool it would be if it were able to change shapes! It kinda looks like it can do so! Another masterclass by the one and only Zaha Hadid, this is a multi-award winning Riverside Museum hosting over 3,000 objects which display Glasgow’s rich past from the 19th and 20th Century. It looks like it is giving a giant middle finger to all the onlookers!