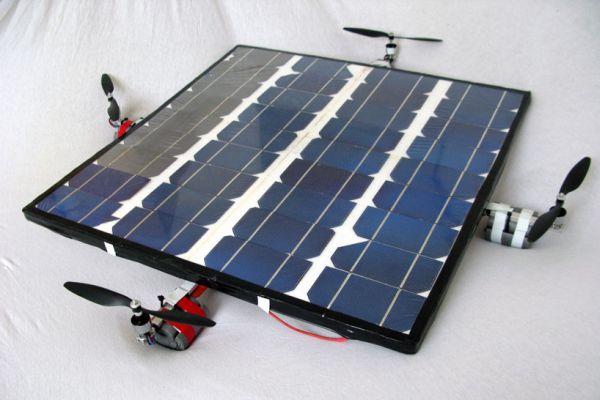 Welcome to today’s world, where science meets fantasy and all that was considered to be a fantasy is now becoming a reality! Whether it’s flying cars or 3D printers, you name it and we’ve got it. Today we will be talking about a quadcopter prototype which has been designed for multipurpose applications and tasks. Coming from the bright students of Queen Mary, University of London, this prototype known as ‘Solar copter’ is exactly what its name conveys; a remote controlled prototype quadcopter that is powered by the sun. Let’s take a history lesson folks; the first Solar copter was designed to rely completely on solar power but with a reserve battery that would take control if the solar panel was not able to provide enough energy. From this starting point, the students made improvements to the design and the subsequent Solar copters were capable of taking off, flying and landing while relying solely on solar energy. Regarding this huge improvement, the students said; ‘With the current design it will fly for as long as the Sun shines in theory and we have tested this experimentally for a substantial amount of time. There is still a lot of work to do, but we are pleased to say that we have proved that it works.’ Many of the parts that Solar copter is made of are hand-made and the students even came up with their own Sun simulator that they used for testing purposes. So far, the team has conducted a series of tests, extensive in nature, and have used different engineering softwares to model various design aspects, all with the key idea of improving and developing their prototype further. The team has high hopes for their invention and believe that this Solar copter will be useful for a number of tasks which include; surveillance, search and rescue, transportation and traffic management. Keeping these applications in mind, students are working to enhance and improve their prototype by attempting to add camera, GPS system and other components which would be changeable and useful as per the nature of task.

The team proudly said; ‘We are still looking for opportunities to reduce the weight of the current design and increase the thrust. We are also working on improving our stability and control of the aircraft and at the same time finding areas where we can further increase its efficiency. The ideal goal would be to reach a feasible design that is strong, light and powerful enough to conduct all the purposes mentioned.’
Check out the video: