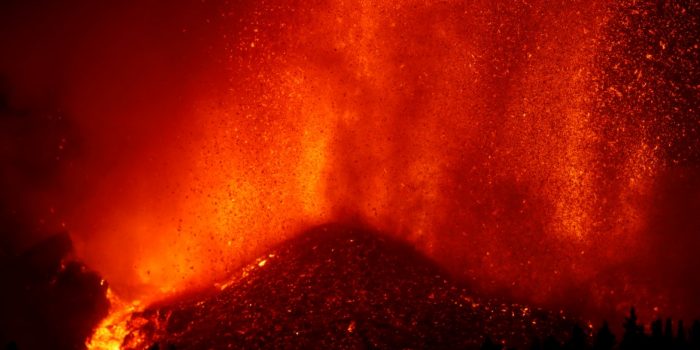 In late September, the Cumbre Vieja volcano on Spain’s La Palma Island erupted, unleashing a torrent of red-hot lava and ash. The lava has now been erupting for six weeks and shows no signs of dying down. It burned through farmland, roads, and homes in the island’s southwest.

On Sunday, the volcano ejected more ash from its central mouth a day after producing its single most powerful earthquake to date.

According to data from the European Union’s satellite monitoring service, lava flowing towards the Atlantic Ocean has covered 970 hectares (2,400 acres) of land since the eruption started. The molten rock has destroyed over 2,000 buildings and evacuated around 7,000 people as it finds its way down the slope.

Fortunately, no injuries have been reported in the Canary Islands due to contact with lava or breathing the noxious fumes surrounding the active volcanoes.

Since the volcanic eruption mirrors a complex geological activity existing deep within the earth and far beyond scientists’ understanding, experts believe it’s hard to predict when the eruption will end.

According to Cornell University geochemist Esteban Gazel, the Canary Islands “are closely connected to thermal anomalies that go all the way to the core of the earth.”

“It’s like a patient. You can monitor how it evolves, but saying exactly when it will die is extremely difficult,” Gazel said. “It’s a process that is connected to so many other dimensions of the inside of the planet.”

In Cumbre Vieja, scientists monitor soil deformation, sulfur dioxide emissions, and seismic events continuously. On Saturday, A magnitude 5 earthquake was felt on La Palma and La Gomera, a neighboring island on the western end of the Canary Islands archipelago, according to the Spanish Geographic Institute (IGN).

The ash column towering above the volcano reached a height of 4.5 kilometers (15,000 feet) on Sunday, according to IGN, before being scattered by stronger winds. As a result, many nearby areas and the base of a telescope were covered in ash.

The eruption has also turned the island into a tourist attraction, particularly as many Spaniards prepare to commemorate All Saints Day on Monday, a Catholic holiday honoring the dead.

According to local officials, 10,000 visitors are expected over the weekend, and 90 percent of the accommodations on La Palma are booked solid. A shuttle bus service for vacationers wanting to see the volcano was established to keep private cars off the main roads and allow emergency services to operate uninterrupted.