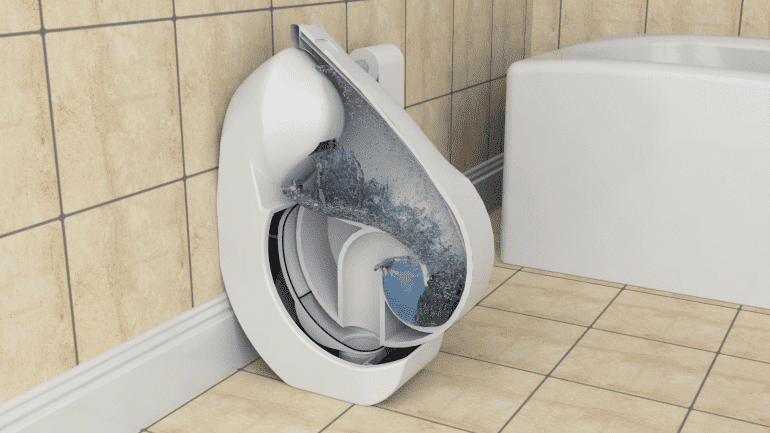 The toilet that we all know and use today took a thousand years to evolve into its current form. But that doesn’t mean that there is no more room for improvement in the design that took thousands of years to evolve. Gareth Humphreys and Elliott Whiteley had this exact idea in mind when they developed the Iota – a version of the toilet that is both more compact and efficient than the modern day loo. The Iota was designed by the two as a final-year-project while they were studying in UK’s University of Huddersfield. The Iota has a folding flush mechanism that moves the entire toilet into an upright position, which allows it to take only a third of the space of a conventional toilet. This space-saving technique makes it the perfect option for those people living in smaller homes or those who are keen on minimizing the usage of space. The new design is also more efficient, requiring only 2.5 liter of water per flush as compared to the 6 liters of an average toilet. According to the designers, the Iota could save 10,000 liters of water, per person, per year. This is great new for environmental fundamentalists who can rejoice at the new concept’s water saving abilities.

The folding bowl contains a special built-in U-bend that disengages from the waste pipe when in a seated position. Folding the toilet activates the flushing mechanism by re-engaging the U-bend. An air tight seal also ensures that the waste remains where it is supposed to. Although the Iota is only a concept at the moment, the designers have submitted a patent application for their design and are hoping to sell the idea in the future. Currently, the Iota is one of the entries at the RSA’s Reinvent The Toilet competition.
Do you like the new design? Let us know in the comments section