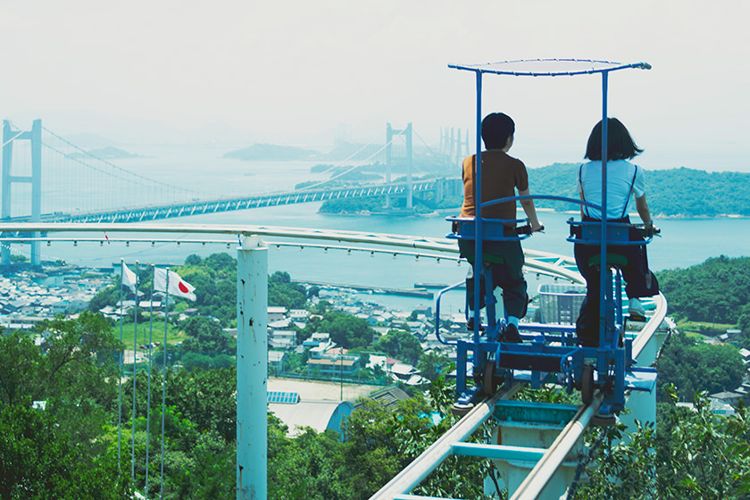 SkyCycle is a pedal-powered coaster ride located in Okayama, Japan. The roller coaster ride is unorthodox because it doesn’t rely on speed, tight turns, or steep slopes for getting your adrenaline pumping. Instead, it capitalizes on the low-speed to give you the run for your money.

SkyCycle is situated on a hill that is covered in greenery at the Washuzan Highland amusement park. SkyCycle is most likely the slowest roller coaster ride in the world. It is because of the fact that it is pedal-powered and therefore moves only as fast as the rider is capable of pedaling. The ride doesn’t feature any steep slopes or gut-wrenching drops. It will, however, have your heart beating crazy by relaying a sense of danger and uncertainty.

It might appear like an attractive ride for those who are scared of the traditional roller coasters, but once you are on it, and you realize that there is nothing but a loose safety belt keeping you on it; your pulse is bound to shoot up. SkyCycle carts are basically sided by tandem bikes that have been attached to a metal rail at about 50 feet above the ground.

If you are brave enough to take on SkyCycle by yourself, you will find it banking towards your side; not a reassuring feeling, we can bet. Any kind of strong winds can also prove to be terrifying because there are no safety rails or anything to prevent you from falling other than just a safety belt. The unique amusement park ride went viral a few years ago because of a video that was shot when the metallic pillars that are holding the SkyCycle track in place were in desperate need of a paint job.

Since then, the metallic pillars have been improved, but the ride remains hauntingly dangerous. It lasts for only three minutes, but it can feel like a lifetime. If you are able to remove your eyes from the metal rail as the ride approaches its end; you will be treated to an amazing view including stunning islands in the Seto Inland Sea and the Great Seto Bridge.

What do you think of this unique and slow roller coaster ride?