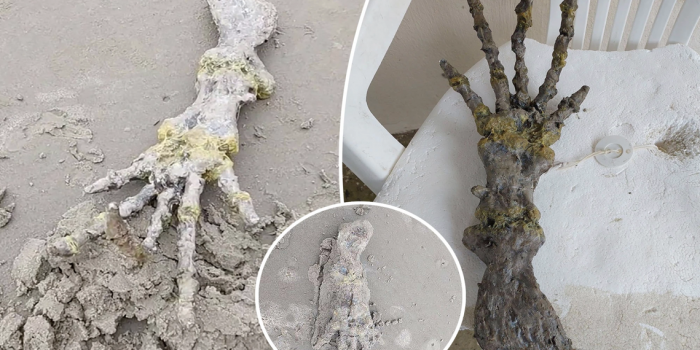 A skeletal hand appendage washed ashore on a beach in Brazil this week, terrifying a couple who thought it was “alien bones.”

On November 20, Leticia Gomes Santiago and her partner Devanir Souza were casually walking on the beach in Ilha Comprida, Sao Paulo state, Brazil, when they discovered an odd skeleton hand. According to Dailymail.co, Leticia hypothesized that the discovery could be an alien.

“We think it is not human because of the size and amount of bones,” Santiago said. “What could it possibly be?”

The couple shot the hand with long boney fingers next to Leticia’s flip-flop after discovering it on a beach in Brazil to highlight the enormity of the skeleton hand.

According to reports, the mysterious monster looks like a big mass and smells like a “decomposing mammal.”

It may have belonged to an aquatic mammal or something from another world. Santiago, of course, sought out social media professionals to ascertain the facts.

One commenter joked that it might be the beloved extraterrestrial from Steven Spielberg’s acclaimed 1982 film about a pint-sized alien, or it could belong to a prehistoric monster.

“Take it to a biologist because this isn’t normal,” another person advised — and that’s just what they did.

According to Eric Comin, a marine biologist, the creepy hand belongs to a cetacean, a group of sea mammals that includes dolphins, porpoises, and whales, therefore the size.

His judgments were based on first impressions, and he noted that more testing would be required to establish which sea creature the odd flipper belonged to – but he’s confident it’s a dolphin.

Based solely on the photographs, the biologist concluded that the creature was most likely dead in the water 18 months ago.