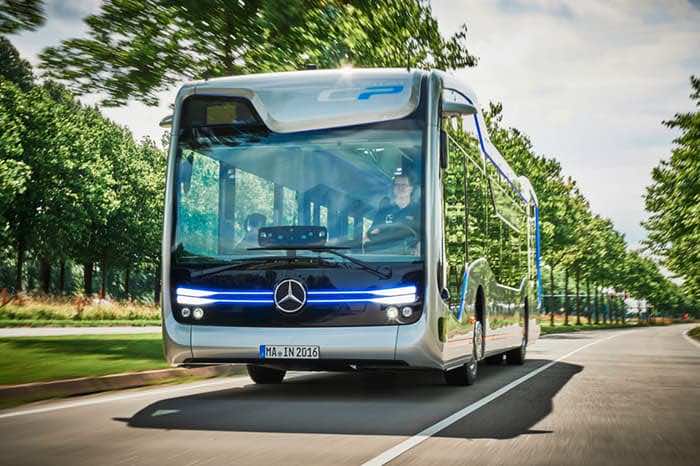 What will be the shape of a futuristic public transport? How will it look like? Well, Mercedes-Benz has given us these answers by demonstration of its Future Bus, a self-driving CityPilot vehicle. This vehicle combines camera, radar, connectivity systems, and is dubbed by Mercedes as “a milestone on the way to the autonomous city bus.” Pretty tech-savvy, right?

The design of this new bus is based on the Citaro bus model by Mercedes that was 12 meters in length. It uses a 299 hp six-cylinder engine known as Mercedes-Benz OM 936. Now, what is this CityPilot anyways?

It is a layered technology platform for the vehicle to control its different functions like acceleration, brakes, automated lane-keeping, and longitudinal guidance. The Future Bus is developed on the technology used by the autonomous Actros truck, another one by the Mercedes. The interior of the bus is large and open-plan style, and it is based on the themes of city parks and squares. The bus has three zones to divide the passengers as per their time of travel. The ceiling lights and grab rails make you feel like you are under a leaf canopy.

There are two pairs of double-width doors in the middle of the bus where passengers can get on and off. The red light bands on a door indicate that it should not be used for entering or leaving whereas green light band is just like the green signal that tells you to “go.” Thus, the time taken by passengers is decreased by light bands on the doors, the position of the doors, as well as the shift to the electronic ticketing system. The new cockpit has a very simple design. Instead of being a separate compartment, it is part of the main one.

The maximum speed of the Future bus is about 70 km/h, and the driver does not need to steer or brake during the journey. All he has to do is control the bus to conform with the traffic requirements. However, in case of emergency, he can control the bus. The CityPilot is deemed safer because it eliminates the possibility of human error. Moreover, it makes the driving more smooth, comfortable, and efficient. Although it is quite attractive, the Future Bus cannot accommodate many passengers. It seems that the company chose a wide and open layout over the need of accommodating maximum passengers.

The integrated technology systems use ten cameras to scan the road and the bus’s vicinity. The distance ahead of the vehicle is detected by four radar sensors (short-range) and two stereo cameras (long-range) that enable obstacle detection using 3D vision. The position of the bus with respect to its surrounding is determined by lane-tracking cameras, four visual location cameras, and GPS. Two downward cameras evaluate the surface of the road, and two more determine factors like bus movement and driver’s actions.

The feedback from all of these cameras is integrated on a single platform, and this process is called data fusion. It gives a finalized image of the location and vicinity of the bus. The future bus is also capable of recognizing changes in traffic lights to travel safely through intersections and bends. It can also recognize pedestrians and stops to allow them to pass while automatically opening doors at the bus stops.

Watch the video of Future Bus below.

The Future Bus, enabled with CityPilot, is running near Amsterdam-Schiphol airport in the Netherlands for demonstration. Its route is separate from main traffic roads, having its separate ticketing system and traffic lights. The route of Future Bus is 19 km long, and it takes 30 mins to complete its journey. The road has tunnels, sharp bends, a dozen of bus stops, and various traffic signals, making it an ideal route for the demo of Future Bus!

Mercedes-Benz is always way ahead of others! What do you think?