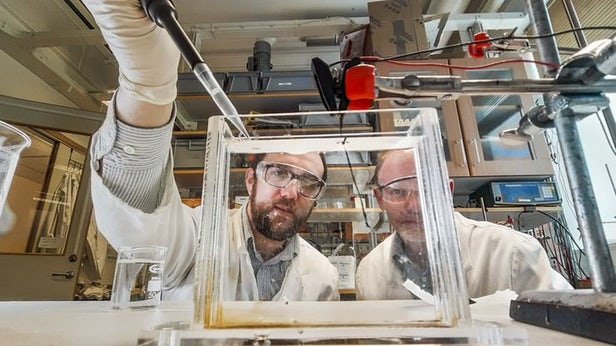 A team of scientists at Linköping University has moved a step closer towards blurring the lines that exist between organisms and robots by coming up with an artificial muscle that relies on glucose and oxygen just like the actual muscle found in living beings. The artificial muscle was created using a unique polymer. This latest development will pave roads towards a future where artificial muscles could be implanted while allowing for the creation of micro-robots that can be powered like the living organs.

The team at Linköping University was led by Edwin Jager, senior lecturer in Sensor and Actuator Systems in the Department of Physics, Chemistry, and Biology. The team made use of muscles that have been created from a polymer actuator which was developed from polypyrrole. Polypyrrole is basically a polymer of pyrrole and is known for is electroconductive properties. It has found its applications in sensors and electronic devices and is capable of changing its volume when provided with an electrical current.

The research team had the polymer converted into two layers featuring a thin membrane within the layers in order to create an artificial muscle. When the charge was applied on one side, the ions in the polymer move across the membrane, thus shrinking the sheet. The sheet on the other end that absorbs the electrons gets expanded. This enables the whole contraption to bend, similar to a contracting muscle.

This charge can be applied using a battery, but it can also be obtained from glucose and oxygen by adding enzymes that can enhance the reaction and burn glucose for energy just like an actual muscle does. Jager said, ‘These enzymes convert glucose and oxygen, in the same way as in the body, to produce the electrons required to power motion in an artificial muscle made from an electroactive polymer. No source of voltage is required: it’s enough simply to immerse the actuator into a solution of glucose in water.’

Jager further said, ‘Glucose is available in all organs of the body, and it’s a useful substance to start with. But it is possible to switch to other enzymes, which would enable the actuator to be used in, for example, autonomous micro-robots for environmental monitoring in lakes. The advances we present here make it possible to power actuators with energy from substances in their natural surroundings.’

The research has been published in Advanced Materials.