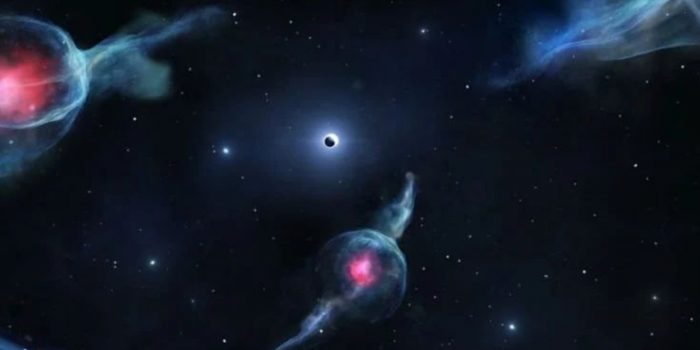 According to a new study of the object, called G2, three baby stars have been found, covered in a thick cloud of the gas and dust from which they were born.

“We propose that the monitored dust-enshrouded objects are remnants of a dissolved young stellar cluster whose formation was initiated in the circumnuclear disk,” the researchers wrote in their paper.

G2 was first seen in 2011. At that time, it was heading towards the stage, perinigricon – the point in its orbit in which it is closest to the black hole.

It was expected that the black hole will tear G2 apart and be slurped up by Sgr A*, emitting supermassive black hole accretion fireworks. However, nothing of that sort happened and it was called a “cosmic fizzle”.

G2 is very hot, far hotter than a cloud of dust should be. It’s possible that Sgr A*, or other stars, could have heated the object, but it remained the same temperature no matter where it was. This meant that its temperature did not get affected by external factors. Given these observations, sometimes it is believed that G2 could have a star inside it.

However, there have been other objects of G found. They are six so far.

The astrophysicist Florian Peißker from the University of Cologne in Germany has come up with an alternative explanation, after conducting a detailed review of 14 years’ worth of observations taken with the Very Large Telescope’s SINFONI instrument.

“That G2 actually consists of three evolving young stars is sensational,” Peißker says, noting that the discovery makes the three stars the youngest stars ever observed around SgrA*.

There are young stars present in the galactic center called the S-cluster. According to Peißker’s team’s model, the G2 stars could belong to this population.

The stars could have originated in the same stellar nursery, forming a cluster, which has since dissolved, with individual stars breaking away and generating new orbits around Sgr A*.

“We can use the environment of SgrA* as a blueprint to learn more about the evolution and processes of other galaxies in completely different corners of our Universe.”

The research has been published in The Astrophysical Journal.