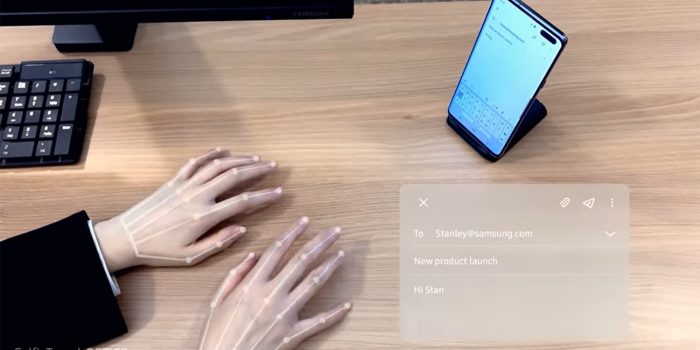 Tired of using the compact keyboard on your mobiles for typing emails? Or you have to carry your laptop everywhere to make your presentations? Not to worry anymore, Samsung is undergoing a research project to introduce invisible keyboards. Surprised to see the milestones technology is achieving today? They are working on their gadgets to soon be a replacement for laptops and tablets. Implementing similar technology as used in recognizing facial features while capturing Selfies, this device also senses your fingers’ movement to detect the alphabets.

Referred to as SelfieType, the demo video showed how the crazy invisible keyboard can be used with mobiles, tablets or other foldable gadgets. The research is being conducted in Samsung’s in-house incubator C-labs and all the device is equipped with, is an AI algorithm along with a front-facing camera for implementation. The virtual keyboard completely operates without any physical interaction of fingers with the screen. It merely detects the position at which the finger strikes and compares it with a Qwerty keyboard to locate the alphabet.

Samsung says the keyboard shall be released as an update for all the users which adds to the excitement of Samsung users that they won’t be needing to switch their handsets to enjoy the experience. Any further details haven’t been cracked yet. An overview of the product was shared at CES 2020. Presently, there are a few invisible keyboards rolling in the market, but they mostly dependent on either Bluetooth or some other technologies. This one, as only relying on a camera, gives us a little confidence in the accuracy of the results. And we believe, we won’t be standing embarrassed in our manager’s office right after typing him an email with the invisible gadget!

Fingers are surely crossed as it seems to be very handy for placing our mobile phones anywhere and pretending out to be a freak for the people around! On the serious side as well, of the product makes it to market successfully, it will give rise to Samsung users and make us boast in front of others. Owing to Artificial Intelligence, once considered as impossibilities, are now making their homes in the real world. With the scarce information in hands for now, we expect this update shall not be a disappointment, as techies around are looking forward to what Samsung is serving on to the specs table. And this one surely shall open up doors for similar technologies in the future.