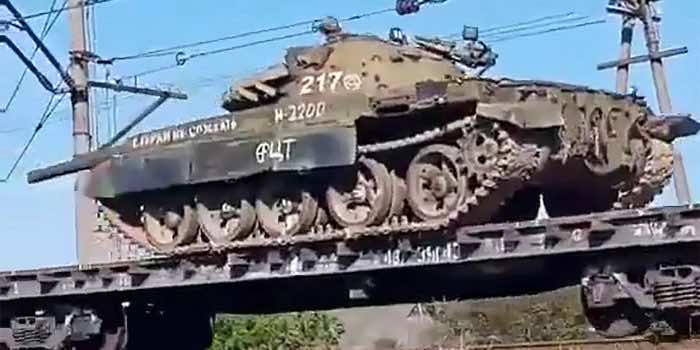 This week, social media users shared videos and photographs of vintage T-62s transported by train to the railhead in Russian-occupied Melitopol, Ukraine, which Russians took over.

Three months into its bigger conflict with Ukraine, Russia is likely encountering a “shortage” of new tanks and is attempting to compensate with obsolete combat vehicles.

The Russian military effort could be hampered by a scarcity of armour reserves, compounded by difficulties constructing new tanks. As Ukrainian gunners and missileers continue to destroy enemy tanks by the hundreds, Russian troops will progressively enter battle with whatever old and obsolete tanks are still operational.

And when the Ukrainians waste less effort and fewer missiles and artillery rounds, taking out more and more geriatric tanks, the loss rate may escalate.

The T-62 is a Soviet medium battle tank from the 1960s that is now defunct. From 1961 through 1975, the Soviet Union produced the 41-ton tank with its 115-millimetre main gun and steel armour. Until the T-72 entered service in 1969, it was the most crucial tank in the Soviet Union.

In the 1980s, the Soviet army began relegating the T-62 to second-line regiments. The T-62—a contemporary of the US Army’s M-60—was decommissioned entirely by the Russian military in the 2010s, as modern Western tanks outmatched it.

Thousands of T-62s were stored in rows in large outdoor vehicle parks with no protection from rain and snow. If Russian President Vladimir Putin had not chosen to escalate his conflict in Ukraine, the tanks might have rusted away.

Putin, however, inflamed the situation. And the Ukrainian army is currently destroying at least four Russian tanks per day while damaging or seizing others. Outside analysis indicates that the Ukrainians had destroyed 391 tanks in 91 days of battle.

According to a team of researchers at the Oryx blog who have been accumulating photo and video data, Russia has now visually confirmed losing 700 tanks since it began its invasion of Ukraine three months ago.