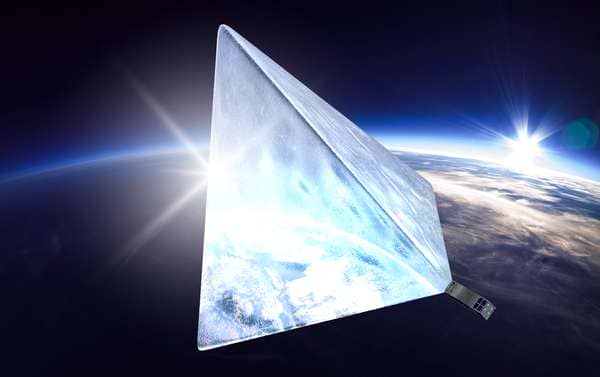 Russia has planned a mission to launch a satellite Mayak, that will be one of the brightest stars in our sky. The mission launch is only a couple of weeks away now.

The tiny satellite is the size of a bread loaf in the form of a Cubesat. Mayak will be launched aboard the Soyuz 2.1v vehicle as a secondary payload on Friday, July 14, from Baikonur Cosmodrome in Kazakhstan. Moscow State Mechanical Engineering University (MAMI) is behind the project that raised over $30,000 on Boomstarter, the Russian crowdfunding website.

The satellite will be launched into the low earth orbit at the height of 600 kilometers (370 miles) where it will unfold a huge solar reflector shaped like a pyramid. Mayak is meant to appear as the brightest star in the night sky, and the Mylar reflectors spreading over 16 square meters (170 square feet) are hoped to do the job. The material is said to be 200 times thinner than even human hair.

The Mayak mission is the first real-life test of the aerodynamic braking system technology that future satellites in orbit will use to safely de-orbit them. It will also collect new atmospheric data at high altitudes.

Exciting as it may sound, it is bound to cause problems for the astronomers who are studying the night skies for useful information. Nick Howes, an astronomer and former deputy director of the Kielder Observatory in Northumberland said, “We fight so hard for dark skies in and around our planet. To see this being potentially ruined by some ridiculous crowdfunded nonsense makes my heart simply despair.”

Russian cubesat 'Mayak' to launch Jul 14 will deploy a reflector that may be as bright as mag minus 10. Astronomers likely to be annoyed.

The project leader Alex Shaenko has said that the satellite “will not be a problem” for astronomers and that there “are a lot of spacecraft flying in the night sky, some even brighter than Mayak.” The team hopes that the project will create more motivation for people to learn about space as the satellite flies over many different locations so people can conveniently see it. The website says it is meant to increase the “attractiveness of science and technology education among young people.”

So next time you look into the sky, you know what the new bright thing is.