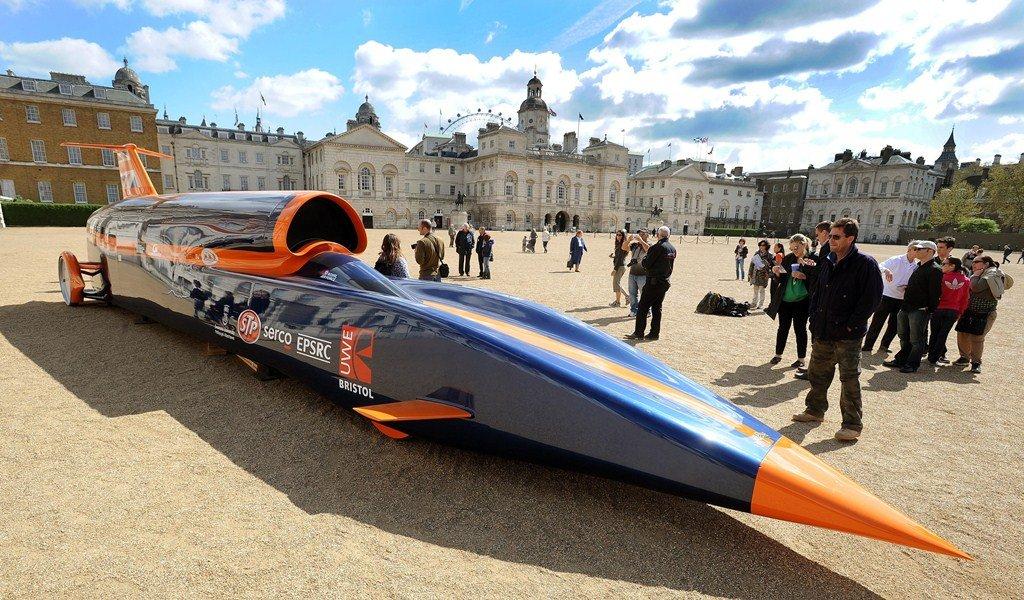 Science and technology are evolving everyday. Things are becoming mature and compact. You may compare the size of the first supercomputer and the new laptops for instance. During this entire hustle bustle, you’ll see many struggles to make certain records; the smallest chip size, the fastest computer etc. How about the fastest car? Like we mentioned in our article about the Lotus Exige Roadster, engineering and science are all about refining inventions and enhancing their performance. What we have today for you is the Bloodhound project! The project has been inaugurated with only one goal in mind; create a car that can reach up to the supersonic speed of 1,000 Mph. This super car project is aiming to break the current land speed record of  763 Mph in the next year, and to move on to set a new record of passing 1,000 Mph in 2015. Bloodhound project includes key members from the 1997 team who were part of the team that set the current top land speed record; Andy Green, the driver and Richard Noble, the Project Director. Now for the important announcement Rolls-Royce will be sponsoring the British project, Bloodhound, by providing financial and technical support to the team of Bloodhound. Aero-engine manufacturer, Rolls-Royce, will provide supercar’s jet engine better known as Ej200 jet engine. If the name of the engine sounds familiar, you’re right. It’s the same one which is used in the Eurofighter-Typhoon. This engine will be used to achieve a speed of 350 Mph, approximately, before a rocket motor shall be ignited to take it to the next level; supersonic level. A dried out lake in South Africa will host the event. If any of you know about Rolls-Royce and their policies they would be well aware that RR generally does not take part in such activities, however, as per Colin Smith, Manufacturer’s Director of Engineering and Technology; ‘In general, we have a pretty robust policy about using our power plants in applications for which they were not designed. The reason we’re prepared to relax this policy in this case because Bloodhound is a professional organization. I am impressed by Richard Noble’s design process and his safety process; and he has a track record.’ Ministry of Defense has been kind enough to donate three Ej200s to the Bloodhound projects; one to be used for spare parts, while the other two for running. These plants are development engines and have only a few hours left in them but that should prove more than adequate for setting a world record. The Rolls Royce badge will enjoy sitting on the Bloodhound car’s engine cowlings. Bloodhound Chief Engineer, Mark Chapman said; ‘The EJ200 was designed with one aircraft in mind – the Eurofighter-Typhoon. It lives within the Typhoon control system, so we’ve had to mimic a lot of the Typhoon inputs so that that engine still thinks it’s in a Eurofighter.’ The engine has a weight to thrust ratio of nine to one. Let’s see what Rolls Royce can make of this!