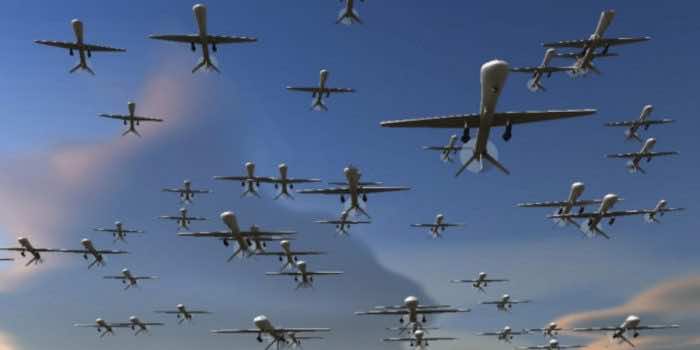 One of the decisive tactics used by militaries these days is to attack a target with an autonomous swarm of drones, as they can be tracked and controlled easily. As far as Taiwan’s situation is concerned, a panel of international researchers came together on an online platform and discussed the importance of swarm drones in a wargame, which depicts how efficient this practice is and how it can assist Taiwan against a Chinese invasion. Simulations have been used for decades to unravel the deficiencies in a military course of action and then to come back stronger with a proper strategic plan.

The Air Force’s Warfighting Integration Capability office (AFWIC), in collaboration with the RAND Corporation, pointed out some details about the deployment of a large number of small drones in 2020 and planned to continue the practice of using unmanned platforms for military purposes ahead. However, the U.S. military is ready in this aspect as gearing of RAND has been done along with fully operational designs of small unmanned aerial vehicles (UAVs), which would take the shape of swarm drones. Most of these are inexpensive and easy to handle as they are connected to the “mesh” data-sharing network, thereby making them accessible and structured.

According to the former deputy director of Defence, “We’re doing some simulations that capture scenarios in which we’re trying to rapidly sink that invasion fleet in the Strait. We’re also trying to clear the skies of PLA [People’s Liberation Army, the Chinese military] fighters, transports, and attack helos, as well as transport helos. So, think of this. Imagine 1,000 unmanned UAVs over Taiwan and over the Taiwan Strait. They are not large aircraft, but they are flying at a high subsonic speed. You can imagine making their radar cross-section indistinguishable from that of an F-35. And the UAVs are basically out in front. They’re doing the sensing mission”.

Officials say that when artificial intelligence and machine learning become engraved in the computing of these swarm drones in this war game, then it would become more technologically sophisticated and would offer additional perks and benefits in the case of any conflict. Lt. Gen. Clint Hinote, the Air Force’s Deputy Chief of Staff for Strategy, Integration, and Requirements, stated that “an unmanned vehicle that is taking off from Taiwan and doesn’t need to fly that far can be pretty small. And because it’s pretty small and you’ve got one or two sensors on it, plus a communications node, then those are not expensive. You could buy hundreds of them.”