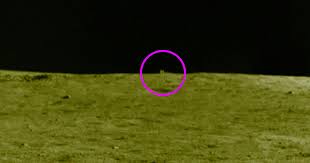 Scientists have been drawn to an intriguing cube-shaped object nicknamed “mystery hut” discovered on the far side of the moon.

China’s Yutu 2 rover captured photographs of the mystery structure from roughly 260 feet away while traversing across the Von Kármán crater in the South Pole-Aitken Basin on the moon. Yutu 2 will take a few months to reach the strange lunar feature after Chinese scientists rerouted the rover to take a closer look.

Although the majority of the scientists believe that it’s most likely just the remnants of a meteor strike — galaxy-brained internet users have come up with their speculations. Furthermore, the rover’s photographs aroused controversy and led to amusing ideas about the cube-shaped object.

“Was it a home built by aliens after the crash landing? Or is it the pioneer spacecraft of the predecessors to explore the moon?” a Redditor commented.

“Canada beat us all to lunar habitation and set up an ice fishing shack,” one Redditor suggested.

“By the time Elon shows up, he’ll find a Tim Hortons every two kilometres,” another added.

While others suggested fleeing away as soon as possible.

“Turn around, go back in the other direction,” one Redditor warned. “Pretend you never saw it. DO NOT ENGAGE THE MOON CUBE.”

Many people, though, recalled a time when bizarre monoliths appeared all over. So is it realistic for another monolith to appear on the moon’s surface? Is it a lunar rock that’s fueling our imaginations, or is it something else entirely?

We’ll have to wait a few months to find out what the cube-shaped thing is, but until then, it’s fascinating to speculate on what the “mystery hut” could be.