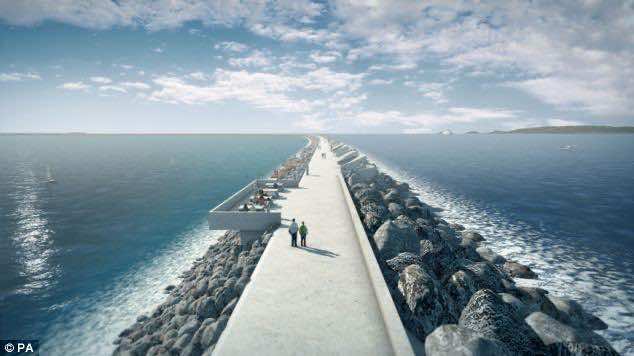 With the hunt for new sources of energy to meet both human needs and protect mother nature, engineers have come up with a lot of ideas that are the first of their kind. One of the latest examples comes from United Kingdom, where plans have been submitted to build the world’s first tidal lagoon energy project. This large-scale project could provide green energy to 120,000 homes in Swansea, Wales for 120 years. The cost of the project will vary between £750 million to £850 million and developers believe that the technology could meet 10 percent of UK’s power needs. The plan involves building a six-mile wall around Swansea Bay to create a lagoon in the Severn Estuary with turbines that could utilize the incoming and outgoing tides to generate electricity for 14 hours a day. The lagoon could be the first of five developments across the UK which,  together, could generate 10 percent of the UK’s power by 2023 if it is given the green light. The project will also give a great boost to the local economy. Tidal Lagoon Power, the company backing the project, said that it hopes that 65 percent of the expenditure will remain in the UK and consequently, boost the home grown supply chain while creating a future export market. The project includes creating a 10 km sea reef, offshore visitor center, water sport facilities, national triathlon and the re-introduction of the native oyster to the Swansea Bay. Initial polls discovered that 86 percent of the locals are in favor of the project as it will create 1,850 construction jobs along with 150 long-term jobs in operation and leisure facilities. Building more lagoons could bring the economy up. The benefits of the lagoons as a power source are many and include flood defense for certain areas as well as minimal safety concerns (unlike nuclear power plants). If the application for the construction of the lagoon at Swansea is accepted, it will be approved by early 2015. With the go-ahead given, construction can start immediately and power generation can start as early as 2018.