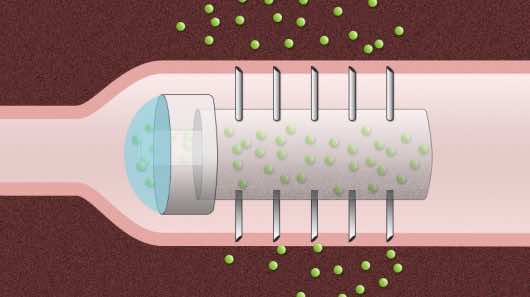 MIT, working in collaboration with Massachusetts General Hospital (MGH), has devised a new method of drug distribution inside the body by injecting the medicine directly into the lining of the intestine.

Normally, the delivery of an orally administered drug to a specific part of the body is a challenge. Rarely do those drugs succeed to pass the acidic contents of the digestive tract and are able to deploy their pharmaceutical payload. This problem becomes more obvious while working with drugs which contain large amount of protein in them. The latest method found by Science is, frankly, an unpleasant one in which the patient is stabbed with tiny metal pipes that let the medicine push through the resultant wound. There has to be a better method to do this, but for the time being there isn’t.

The capsule measures 2cm in length and 1cm in diameter. The center of the capsule is designed as a reservoir to hold the drug, which is then injected into the intestinal region via a series of 5mm long micro-needles that function as the outside coating of the pill. To assist with ingestion, as the capsule is on its way through the digestive system, the needles are protected by a PH coating that dissolves when it reaches the intestine.

Significantly, the acrylic coating lets the drug survive the hostile journey through the stomach saving the effectiveness of the pharmaceutical contained inside it. Furthermore, the design of the pill will allow it to be used for a number of different medicines, without any redesigning required. And the lack of pain receptors in the lining of GI tract will shield the patients from knowing that the needles are actually delivering the medicine.

The capsules have been tested on animals; Insulin was administered to pigs. The results turned out to be promising without any major side effects. The glucose levels of the pigs dropped effectively and it actually proved to be more effective than the method where insulin is administered with traditional subcutaneous injection.

The team believes the capsule will have a wide range of uses in the future, from treating autoimmune disorders like arthritis to supervision of vaccines for illnesses such as meningitis, that contain a biological factor. The pill will also be able to deliver antibodies to cancer patients, as a substitute method to treatment to the usual method that includes a series of painful injections.

In future, the team is planning to refine the capsule and eventually move on to human trials. For this purpose, the researchers are working to create an improvement of this project that contains solid needles from polymer and sugar. In this configuration, the medicine will be contained inside the needles itself which will tear off from the pill and will implant themselves in the lining of the GI tract. Once implanted, the needles will slowly release the drug in a natural manner which is then dissolved by the intestine. There are also plans for the development of the pharmaceutical delivery process in terms of efficiency, by using the natural contractions of the digestive area to squeeze the capsule for medicine. A detailed paper on the team’s work has been published in the Journal of Pharmaceutical Sciences online.