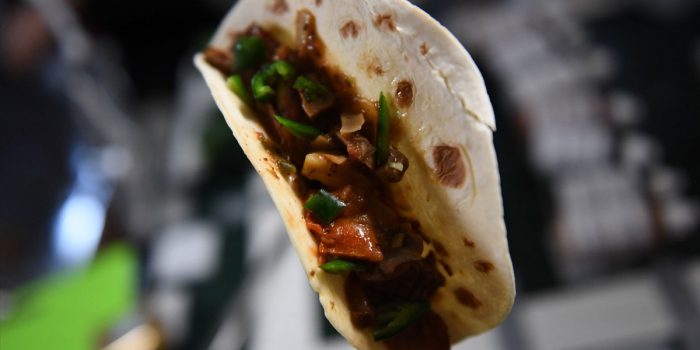 Some of humanity’s first space-grown chilli peppers have been consumed in orbit, taco-style.

On Friday, the International Space Station hosted a taco party for astronauts to commemorate the harvest of the first space-grown chile peppers. After launching the plant experiment on the space station in July, the crew finally got a chance to taste-test the peppers.

NASA astronaut Megan McArthur, one of seven crewmembers currently living aboard the International Space Station (ISS), made the tacos. She calls it “my best space tacos yet” with some newly harvested peppers, fajita beef, and rehydrated tomatoes.

The chile peppers were grown in space under NASA’s Plant Habitat-04 experiment, and it was the first time something like this had been raised in space. After a four-month vegetative phase, they were harvested last week. More peppers will be returned to Earth for research.

“It is one of the most complex plant experiments on the station to date because of the long germination and growing times,” Matt Romeyn, principal investigator for PH-04, said in a July statement.

“Another crop of chiles will be grown and harvested by the Crew-3 astronauts,” according to a tweet from the ISS research team.

According to a recent report, NASA’s Kennedy Space Center instructed the Advanced Plant Habitat to blow a fan at the pepper plants’ flowers to transfer pollen because peppers are self-pollinating. Some of the flowers were pollinated by astronauts.

The fact that the SpaceX Crew-2 astronauts, including McArthur, were still on board when the chile peppers were ready for harvest was a stroke of luck. The peppers were supposed to return to Earth on Sunday, but the Crew-3 mission had to be postponed due to a “medical issue.”

Scientists will now investigate how microgravity affects plants and peppers.

This experiment proves that humans can flavor their food even when traveling in space.