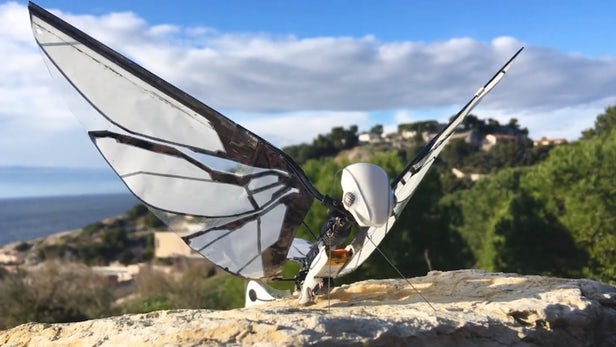 Do you remember French aeronautical engineer Edwin Van Ruymbeke? Does the name ‘Bionic Bird’ ring any bell? For those who are still unsure; five years ago a French aeronautical engineer by the name of Edwin Van Ruymbeke was able to successfully crowdfund his Bionic Bird – a remote control model that flew by flapping its wings similar to an actual bird. The same engineer is back with an insect-inspired MetaFly!

The Metafly will remind you of the robots that were created by Festo. It weighs in at less than 10 grams and is 7.5 inches long and features a wingspan of 11.4 inches. The wing-flapping of Metafly is carried out via a mechanical coreless motor that has an aluminum heat sink. The motor is powered by making use of a rechargeable lithium-polymer battery.

You can charge the battery by docking the MetaFly with the 2-channel radio remote control unit. The radio remote control unit is included in the package and holds four AA batteries. The MetaFly will draw current from these batteries, and a single 15-minute charge is enough to allow for about eight minutes of flight time. A total of 15 flights are possible using one set of the remote’s batteries. Users can also choose a separate 1,500-mAh power bank that can provide you 20 12-minute charges before requiring its own recharging. The remote has a range of 100 meters while the maximum airspeed of MetaFly is 11 mph.

Reportedly, crashing the MetaFly is not a problem since all parts of the contraption are flexible. The wings have been crafted from carbon fiber, liquid crystal polymer, and oriented polypropylene. You can alter the flight characteristics of MetaFly by adjusting the angle of the tail. The MetaFly is currently raising funds at Kickstarter, and a pledge of $78 will help you get your hands on one when and if it reaches production. The retail price, planned, of course, is $146. Check out the promotional video of MetaFly below and let us know what you think of it;