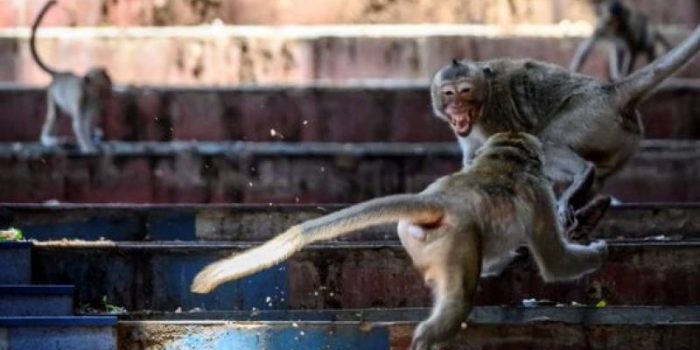 According to the Pennsylvania State Police, a pickup truck transporting an enclosed trailer with 100 monkeys collided with a dump truck, causing four monkeys to escape.

Three monkeys were discovered and killed when a vehicle transporting 100 primates to a laboratory collapsed, allowing the primates to flee, sparking a police hunt. The monkeys arrived in New York on Friday and were originally from Mauritius.

On its way to a facility in Florida, the vehicle turned in front of an incoming dump truck near Danville, Pennsylvania, on Friday.

According to police, “a small number of monkeys may have fled the collision scene into the surrounding area” on Friday. Police claimed all 100 monkeys had been found by Saturday night.

According to local news outlets, the escaped monkeys were slaughtered, citing the US Centers for Disease Control and Prevention.

It was previously thought that four monkeys had gone missing following the collision. However, according to sources, the cynomolgus monkeys were tracked down by a police helicopter equipped with infrared cameras while cops on the ground utilized bright flashlights.

The cynomolgus monkeys, which can cost up to $10,000 each and are commonly employed in scientific study, were on their way to a facility in Florida when the incident occurred at approximately 3:20 p.m. on Route 54 near Interstate 80 in Montour County, roughly 150 miles northwest of Pittsburgh.

At the start of the pandemic, cynomolgus monkeys were in such high demand for coronavirus vaccine research that some scientists discussed the necessity for a strategic monkey reserve, an emergency stockpile comparable to those kept by the US government for oil and grain.

The monkeys, also known as crab-eating or long-tailed macaques, with their reddish-brown coats and pink, whiskered cheeks, are notorious for using their hands to retrieve food from burrows and can live up to 30 years in captivity, according to the Wisconsin National Primate Research Center.