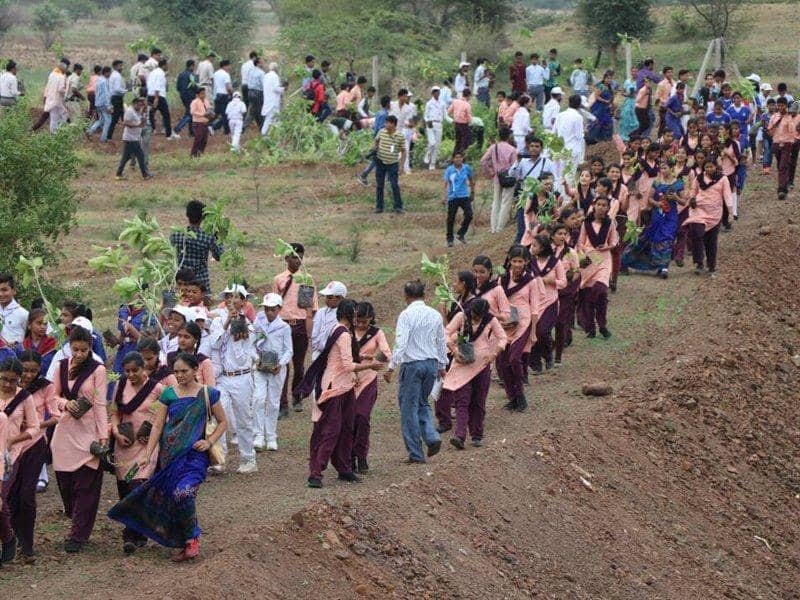 As Trump chose to withdraw from Paris Climate Agreement, the rest of the world is bent on doing good for the environment. China is planning to build a forest city to fight air pollution, and India stepped in by planting 66 million trees in just 12 hours, breaking the country’s own record that it set last year.

The Central Indian State of Madhya Pradesh had an outpour of volunteers who planted 6,630,000 tree saplings between 7 am and 7 pm on Sunday. This latest green-feat was carried out on Sunday in Madhya Pradesh, a large state in central India. Between 7 am & 7 pm, floods of volunteers planted 6,630,000 tree saplings. Or, as they say in India, “6.63 crores,” as each crore denotes ten million units.

Just last year, the country had set a world record, planting 49.3 million tree saplings in Uttar Pradesh in 24 hours. The recent record has not been certified by Guinness World Records yet, but that is bound to happen soon.

At the Paris Climate Change Conference, India announced that the country would increase their forest covered area to 95 million hectares (235 million acres). The government is investing funds of $6.2 billion for the initiative encouraging the country’s 29 states to participate.

CM of Madhya Pradesh tweeted after the event:

Villagers of Konda in Dhar district have gathered to plant 10,000 saplings as part of the historic #MPPlants6CroreTrees pic.twitter.com/epU7ci2POU

India is known to be one of the biggest producers of carbon emissions, and the city life is marked with extremely poor air quality. With the recent initiatives for green energy and environmentalism, that image has begun to transform globally.

India is taking a huge step turning from coal burning to renewable energy sources and a Fellow at Observer Research Foundation, Harsh Pant talked to the New York Times commented, “Modi knows climate change is good politics. Climate change makes sense to Modi because he believes it as it is good economics and politics.”