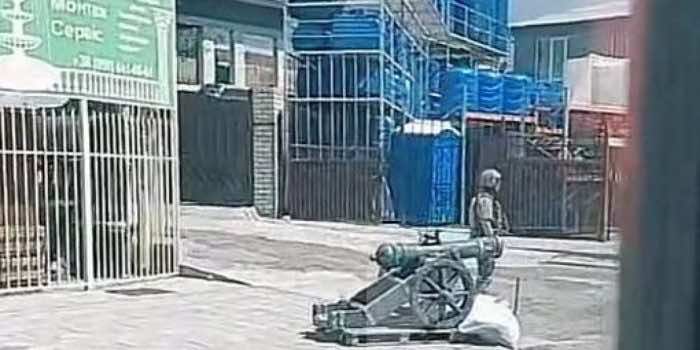 The antique-looking gun-loading cannon that appeared at a Russian checkpoint in the southern occupied Ukrainian city of Kherson demonstrates how badly Russia is armed with old, outdated weapons.

Dambiev, a RussianTelegram user, tweeted a photo of an artillery piece mounted on a wheeled vehicle and stationed on a Kherson public roadway on May 17. The soldier standing near the antique piece has been identified as a member of the Russian National Guard or Rosgvardia.

The cannon is lying on a pallet with sandbags in front of the carriage wheels, as depicted in the photo. However, it is hard to determine whether the artillery piece is authentic or was stolen from a museum or a military memorial. Perhaps it was only a prop to fool people into believing there was a more powerful weapon inside. Also, the photograph appears to be outside a corner store, implying that it is a marketing move to entice people.

Furthermore, even if the cannon observed in Kherson is fully operational, its potential power remains unknown. You never know when the cannon might discharge a fatal shot from whatever was shoved down its muzzle. However, it’s impossible to estimate how large a shot it might fire from the photo, despite its age and antiquated technology.

Several late-nineteenth-century firearms are being deployed in Ukraine. For example, separatist troops from the Luhansk and Donetsk Peoples Republics have recently been observed holding pre-WWII Mosin Nagant rifles.

In a video shared on Twitter, separatist troops are shown brandishing guns and wearing WWII-era steel helmets. Commercial-grade radios that are vulnerable to capture by Ukrainian soldiers have also been deployed.

Other Russian-aligned rebel forces use Mosin-Nagant rifles with PU scopes developed in the Soviet Union. Along with Mosin rifles, personnel were expected to utilise mortars and automatic weapons in combat without any prior instruction. Some units have refused to attack due to outdated equipment and rotten food and water.

It’s hard to determine why Russia wouldn’t arm these forces with older-model AK-47 assault rifles, given that Russia is expected to have still stockpiles of the legendary AKs produced by the Soviet Union during the Cold War.

In contrast, Russia’s force in Ukraine is better equipped than many of the defenders it encounters. Russian troops use the advanced AK-74 and AK-12 guns on the front lines, and some have become Ukrainian souvenirs.

Despite this, the war continues to give a unique mix of old and contemporary, such as aerial drones firing mortars that appear identical to those used during World War I.