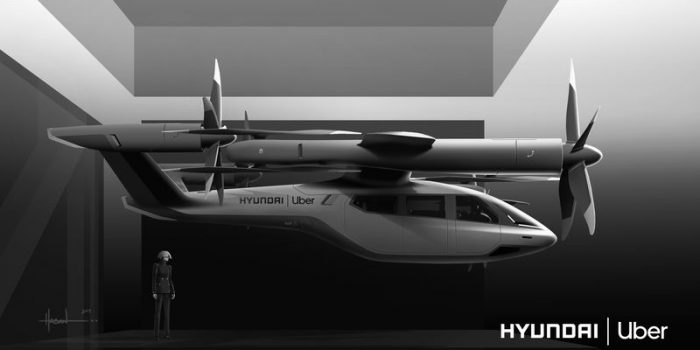 Fed up with all the noise pollution, a flood of cars on the roads and traffic building up each day? Uber- a leading US-based ride-hailing company that has eased daily transit, joined hands with Hyundai-a top-notch vehicle manufacturer and gave a glimpse of 2023’s air-based taxis. Yes, you heard it all right, the model has been presented in the Consumer Electronics Show (CES) 2020. Hyundai and Uber partnered to take a step up in the taxi network deploying aerial vehicles and making the market worth $1.5tn in another couple of decades.

The flying car design includes vertical take-off and landing with a capacity of four to five passengers. The taxi will move at a speed of 200 miles per hour, 1000 to 2000 feet above ground level. If you are good at memory, you might remember a promise made by Uber to implement the ‘Uber Elevate’ model. And the ambitious plan is now being backed up with Hyundai’s manufacturing capabilities.

Worried if pollution is next targeting the air you breathe in? Well, the eco-friendly hype constraints the freedom of design and no company would dare overlook it now. Hyundai too shall be using small electric powered motors that reduce noise pollution. Here again, the savior of all, Artificial Intelligence shall be used for path planning and mapping of routes. Not only this, but a landing hub has been included in the model as well with “Purpose Built Vehicles” (PBV) to and from the station. These PBVs are intended to be multi-functional serving as medical stores, coffee shops and much more.

The sketches are all fine and the model mind striking, but the fabrication still requires some time and Uber has promised a test drive in 2023, not really far away though. The two firms should work on their toes as one has to make the dream flying car, while other has to complete all the operations with a running app to get the bookings done. Once the test drive gets successful, batch production of the aircraft will be in the lane as who won’t be waiting for an air drive? Initially, Uber told, the flying car shall be driven by drivers but sooner or later, they’ll be shifted to autonomous mode. No further statistics and details of the plan have been unveiled yet.

“By taking the transportation out of the two-dimensional grid on the ground and moving it into the sky, we can offer significant time savings to our riders,” Eric Allison, head of Uber Elevate, said.

All this makes us wonder when to expect your groceries being delivered via a helicopter? Or an autonomous air bike? Maybe you’re the next one pooling up an air ride with your colleague? Not to ignore mentioning Uber bus taking off the next flight!!