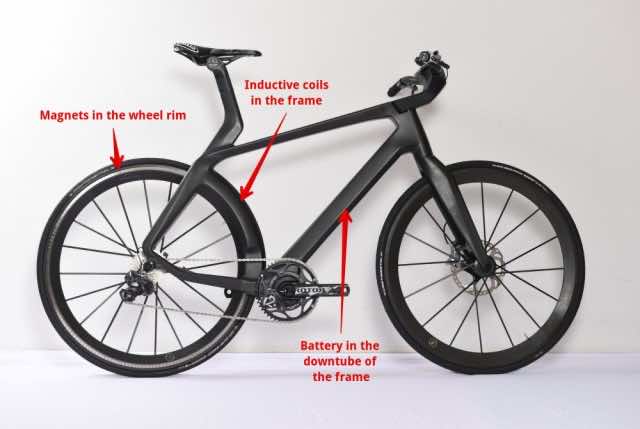 Almost every professional sport has had its share of criminality and “unsportsmanlike attitude”; and professional cycling is no exception. Definitely one of the most ground shaking examples in the cycling world and probably in world of sport was the revelation of intake of PEDs by “in”famous  seven-time winner Tour de France cyclist Lance Armstrong.

Cycling enthusiasts yet had to recover from this major shock when another form of cheating called mechanical doping has dented the reputation of the game even further. This year’s world championship of cyclo-cross in January saw the officials catch a bike with a hidden electrical motor in the frame. The 19-year-old Belgian cyclist Femke Van den Driessche was suspended and later on got a six-year ban for her shenanigans.

Several keen eyes and minds have been suspecting some sort of cheating in the avenues of the sport of cycling for years now. YouTube is littered with “conspiracy theories” exposing odd happenings in the build up and during the course of the race which can be only explained by taking cheating into the equation. The video in the hyperlink above contains complete CAD animations on how a bike’s performance can be enhanced with an electric motor. It has over five million hits and in the wake of recent revelation, seems very plausible. Other examples like the spinning of the rear wheel on its own after its rider has unmounted it for quite some time are also there on the web to see. Fingers have been raised at the riders who show supernatural bursts of performances, like coming up with unforeseen energy and leaving a leading pack of riders who were already cycling at full throttle.

The above picture was the result of one of the journalist’s prowess and grit, where he used a thermal imager hidden as a video camera to capture many suspicious hot spots. These pictures were there for everyone to see, but unfortunately, neither the bike or the team was identified.

Until Femke was caught, UCI had no luck with finding any evidence to curb this menace. They had been using X-rays machines, detailed visual probes, ultrasonic testing, and magnetic flux detection techniques; and had disassembled approximately hundreds of bikes in a bid to look at this ” helper motor”, but all in vain.

Finally after catching one of the cyclist red-handed, the scores of people who were pleading about this for ages came vindicated. So, what the “ingenious” methodology applied behind these motors?

The caught technology had the racing bikes fitted with small electronic motors that can rotate the wheels without the cyclist’s effort, and adds considerable power to the bike’s driving mechanism. The Vivax configuration  as claimed by the company, involves a motor hidden inside the tube of the bike frame, which is undetectable by the naked eye. A switch is then added anywhere feasible with all the wiring well hidden. A wireless design using Bluetooth is also available. The controller and the PCB is hidden in the bike, along with a large battery; which can run your bike for a good part of two hours at a low power setting. This battery is usually hidden as a water bottle, but it is sometimes also hidden in the frame of the bike besides the motor.

Vivax’s Version
This 1.8 kg Vivax Assist cylindrical motor is specifically designed to be well hidden in the bike’s seat tube, and to be activated unobtrusively using a small button. Power is transferred from the vertical motor by using a worm gear. Vivax has maintained that they have not built this technology for racing purposes. They say it is merely an assist for the less fit so that they can, lets say save their face when on a group cycling tour etc. Or it can give a good alternative for people who want to shed off the use of cars, but are not able to physically cope with the strains of using a cycle day in, day out.

However, the cost of the device (close to USD$3,000) is a very expensive accessory for mere riders, and seems to be indented towards more professional ones.

This motor has near to no additional sound when running. And also provides no additional resistance in the drive train of the cycle when it is being operated.

Even with almost noiseless Vivax motors, there are people who are bragging about their smaller, quieter motors, which are virtually undetectable. They are usually custom made and cost around USD$11,000 to $28,000.

Rear wheel hub designs are also available. But they are simply too large to be hidden away during a race. Designs using magnetic induction are also available in the market. Magnets on the wheel rim are moved by coils on the bike frame. Once you get the wheel spinning and power the coils, the wheels will automatically pick up speed.

Engineers on the good side

While the world is going berserk in finding ways to cheat, there are still people who are working for the good side. A number of detection techniques like visual inspection, airport-style x-ray machines magnetic flux detection, ultrasonic testing, thermal imaging have been deployed to save this sport from an even more tarnished image.

A handheld IR camera for professional use can be used for thermal imaging and it only costs a few thousand dollars, nothing for the cycling federation.

These thermal detection devices are probably the simplest and easiest to use as in racing conditions even the slightest of heat can be detected. A working electrical motor or a magnetic flux system generating heat would be a clear hot spot.

UCI has stuck to their own technology called “tablet teslameter” device which is used to detect magnetic fields. A teslameter is another name for a magnetometer. The UCI claims that this can detect both hidden motors and magnetic wheels using magnetic flux density detection.

The major advantage of this device is that it can even be used on bikes which are not running. This allows the officials to test bikes gathered before the race, or well after the race is over. However, one of the reason why this has attracted so much criticism is the fact that the magnetic field density drops by the distance cubed, thus the device has to be held really close to the bike when testing. This renders it useless in real racing scenarios, which is where the real deal happens.

After the Femke exposing, the question is no longer if this doping technology would be used in any future professional races. The real question is: How will it be hidden?

This probably is the start a new game of cat and mouse, with engineers on the dark side looking to perfect the art of cheating using a bicycle; while the other is working day and night in order to expose and neutralize their underhand measures.

Do you agree with our conclusion? Or do you think this will be the end of cheating in the world of cycling?
Comment below!