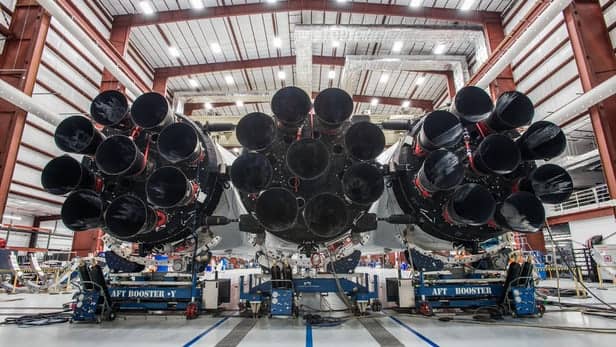 SpaceX has been working on the Falcon Heavy rocket for quite some time now and is finally nearing completion. This rocket is the one that is supposed to carry humans to Mars one day and will have the most powerful booster ever added to a rocket.

The Falcon Heavy rocket is set to make its first lunch next month and we just got our best look at it as Elon Musk tweeted pictures of the almost complete rocket in the hangar. The Falcon Heavy is basically 3 Falcon and 9 stages rolled into one, with a second stage atop the middle one.

Falcon Heavy at the Cape pic.twitter.com/hizfDVsU7X

There is a possibility that the Falcon Heavy rocket might explode during its first launch and Elon Musk has tried to manage expectations as he said at the 2017 International Space Station Research and Development (ISSR&D) conference in Washington. “I hope it makes it far enough away from the pad that it does not cause pad damage. I would consider even that a win, to be honest. Major pucker factor, really; that’s, like, the only way to describe it.”

Even though the timing and the date of the launch are not confirmed yet. It is going to be somewhere in January and millions of fans will be eagerly waiting to watch the proceedings.