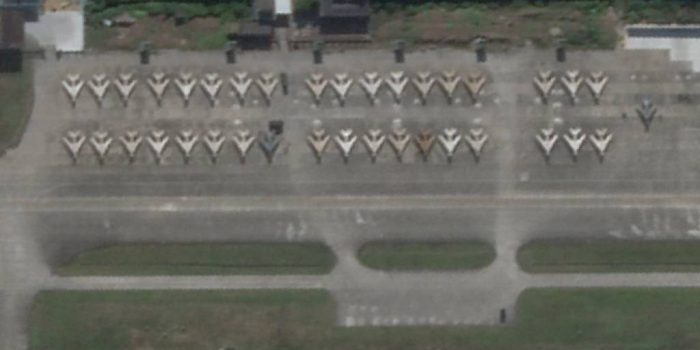 China has displayed retired fighter jets from the 1950s that have been converted to unmanned drones, with satellite images of two of its east coast bases near Taiwan showing a large number of the J-6 fighter jets on site.

In October, Defense News received images of the planes from Planet Labs, a satellite data company based in California. The photos were taken on an unknown airfield, and the ceremony included a commemorative banner that had been digitally altered to remove the training brigade’s identity. The five-digit serial numbers on the J-6s, which identify the unit to which they owe allegiance, have also been blurred.

The Shenyang J-6 is a Chinese version of the Soviet Mikoyan-Gurevich MiG-19 interceptor, retired from PLAAF service in 2010. The J-6 was considered obsolete by all standards at the time, as it lacked air-to-air radar. However, since then, satellite imagery has revealed a slew of J-6s at two airbases in China’s coastal provinces bordering Taiwan.

In 2013, reports surfaced in China that the PLAAF was converting the planes into drones “for use either as a decoy to overwhelm adversary air defenses by their sheer numbers or as a rudimentary unmanned combat aircraft.”

A J-6 drone is a reasonably cost-effective option for the applications mentioned above. Unless any in-flight radar or stray electromagnetic signals are detected, enemy radar systems will identify a J-6 as a threat. J-6 also has six hardpoints on the wings for carrying infrared-guided air-to-air missiles or air-to-ground munitions. This could lead to air forces, such as Taiwan’s, rushing fighters for an encounter, misdirecting planes from other critical missions.

J-6 also has six hardpoints on the wings for carrying infrared-guided air-to-air missiles or air-to-ground munitions. Moreover, J-6 could be loaded with bombs and sent on suicide missions against highly armed targets.

Satellite imagery of two airbases in China’s coastal provinces opposite Taiwan shows a large number of J-6s. They have also been seen in satellite photos taken over the years at various bases, indicating that these aircraft are still operational and have not been junked.

However, China has yet to officially acknowledge the existence of the J-6 conversion into an unmanned aircraft.