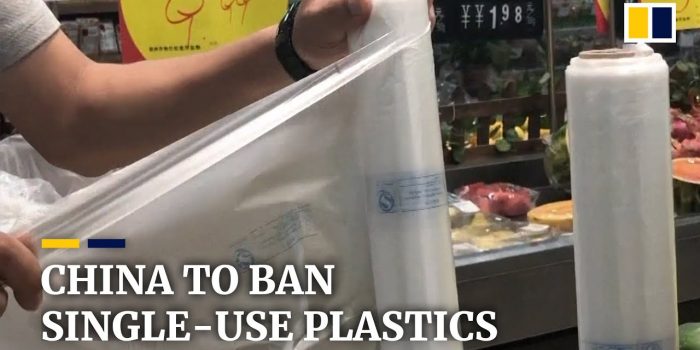 When we debate about an eco-friendly environment and greener nations, do we ponder upon our role and the way we contribute to pollution? An object that has become attached to our daily lives yet is the biggest enemy of our environment is ‘plastic’.

China, while enjoying the highest positions in development and advancement, has stepped forward in contributing towards a healthy atmosphere. Previously, China has announced a ban on the single-use plastic and strictly asked the people to avoid the sale as well.

As the initial step, a majority of plastic products have been banned and a five-year-long plan has been put forward to bring the use of plastic to a minimum. It’s not so easy accomplishing it though, because many industries rely on plastic and finding a good, economical and beneficial alternative is yet another milestone we look forward to.

Listing all those things that can impact the minimization of plastic use such as shopping bags, polyethylene agricultural film, and plastic equipment used in medical or in restaurants have been cut down. Proposing the new plan, the government officials say, “Plastic is widely used in production and life and is an important basic material. Irregular production, use of plastic products, and recycling of plastic waste will cause waste of energy resources and environmental pollution, and increase pressure on resources and the environment,”

They have also included the positive impact the movement shall have on health of citizens. But the goal cannot only be achieved by imposing restrictions. A proper check and balance have to be conducted out to check if the compliance is taking place or not. Instructions forwarded to industries do include initiatives for a greener environment, strengthening of greener managements, etc. Moreover, cut down of all plastic wastes or equipment currently being used there. Restaurants and hotels are advised to refrain from plastic straws, bottles, etc. and pour in their contribution to the mission.

The phrase, ‘better late than never’ best fits the situation here as China had been the largest producer of plastics. Around 30% of the world’s plastic was coming from China alone. Following the line, North America was second while Europe being the third one.

These nations alongside the industrial and technological revolution they are bringing should ponder upon the environmental policies they are following. As the market is largely shared by the above mentioned three, their contributions can have bigger effects and they can serve as an inspiration to the rest of the world.