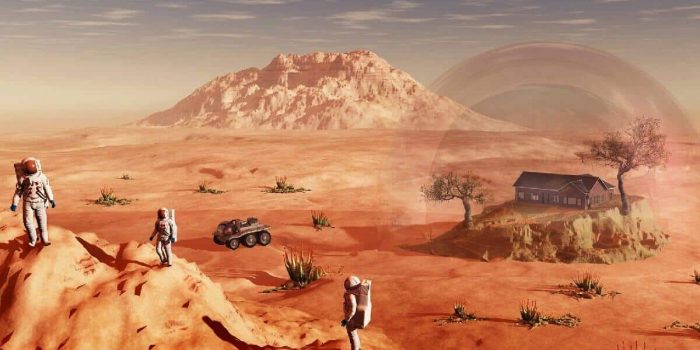 The population on the moon and Mars could grow due to the blood, sweat and tears of pioneering astronauts.

Moving a single brick to space could cost more than a million dollars, making the potential construction of off-world colonies sound expensive. Scientists at The University of Manchester have formed a concrete-like material containing a mix of synthetic regolith from Mars or the Moon, a protein found in human blood, and a compound found in human urine, sweat, and tears as a potential solution to this problem.

These bio-composite materials are considerably stronger than conventional concrete and may be used to construct structures on distant planets — assuming astronauts would volunteer to be blood bags.

“Scientists have been trying to develop viable technologies to produce concrete-like materials on the surface of Mars, but we never stopped to think that the answer might be inside us all along,” said materials engineer Aled Roberts of the University of Manchester in the UK.

According to the most recent data, each kilogram included in a rocket launch costs at least US$1,500, not to mention the expense of getting it there. According to 2017 research, shipping a single brick to Mars might cost up to $2 million. Therefore, if we can build structures out of currently available resources, it will be beneficial.

Experiments with regolith simulants for the Moon and Mars have demonstrated that these can be used as building materials. However, you’ll still need to glue them together, which is where the human body may come in handy.

Last year, an international team of scientists discovered that urea helps plasticize concrete, making it more flexible and harder to survive mechanical loads. However, Roberts and his colleagues have gone even further. AstroCrete is a concrete held together by a protein called albumin, found in human blood plasma. The team used albumin to make extraterrestrial regolith biocomposites using a simple fabrication technique.

Synthetic spider silk and bovine serum albumin, both of which could be found on Mars, were also tested and found to be effective. According to the team’s article, the initial supply of blood protein would be obtained from astronauts.

“In essence, human serum albumin produced by astronauts in vivo could be extracted on a semi-continuous basis and combined with Lunar or Martian regolith to ‘get stone from blood’, to rephrase the proverb,” the researchers wrote.

Six humans could donate enough albumin to make 500 kilogrammes of AstroCrete in two years. According to the researchers’ estimations, each crew member’s donation would provide enough building material to expand the habitat to accommodate that individual.

“We believe that human serum albumin extraterrestrial regolith biocomposites could potentially have a significant role in a nascent Martian colony,” the researchers wrote, “but will eventually be superseded by versatile bioreactors or other technologies as they mature.”

The research has been published in Materials Today Bio.