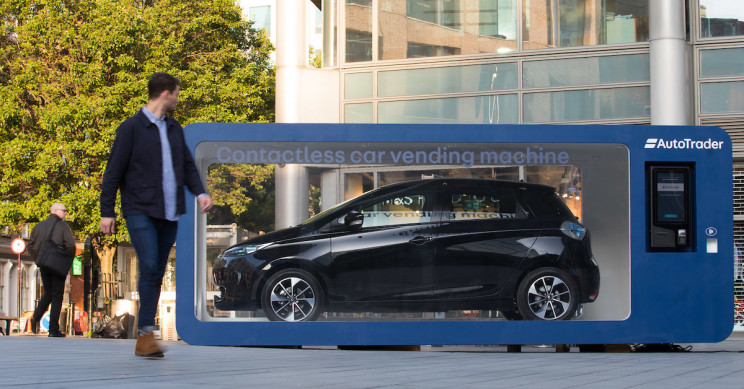 Are you among those who hate the fact that you need to haggle for a car? If yes, then Auto Trader has got you covered. Auto Trader is an auto dealer based in London. The company is testing Britain’s first car vending machine in Spitalfields Market that is located in London.

The experiment focuses on creating awareness about the difficulties of car price haggling and the benefits that pre-haggled prices have to offer. The designers are hopeful that the vending machine will help people get rid of the anxiety that is linked to the car buying process.

Auto Trader has installed a glass box in London’s Spitalfields market. The glass box has a Renault Zoe that can be purchased for a pre-haggled price of £16,000 via contactless payment using a smartphone by anyone. A team of six engineers at Auto Trader spent a total of three months to design and build the contactless car dispenser. The team developed a custom-made point of sale system and key release function while also creating an integrated payment and door release mechanic.

In essence, these vending machines help you to get rid of the need to negotiate a car deal. The contraption has been created by Auto Trader in light of a survey that the company carried out. The car trader inquired from 2,000 people about what they thought of haggling as a part of the car buying process. According to Auto Trader, 9 out of 10 respondents said that they considered the process to be ‘embarrassing and uncomfortable.’

The first entry on the respondents’ list of anxieties was haggling on prices (41%), and hidden costs were at the second spot (39%). This implies that people are more concerned about the interaction for negotiating the cost as opposed to the actual cost itself. Furthermore, the study revealed that 28% were worried about making the wrong decision, while 25% were worried that they wouldn’t be able to receive the car timely after buying it.

A spokesperson for Auto Trader said in a press release, ‘This Renault Zoe can be purchased at the touch of a card, testing London car buyers’ appetite for electric cars as well as a more instant purchasing future.’ This is not the first car vending machine in the world as Caravana has already released its own machines in Texas and in Japan, a big 15-story car vending machine enables buyers to buy the car of their choice from a huge selection of luxury cars.