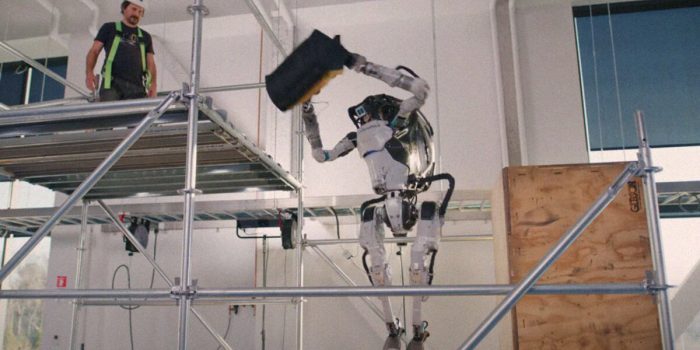 Boston Dynamics’ handy bipedal robot Atlas deftly threw an entire bag of tools to a human construction worker who was standing on top of some scaffolding above. While the ad was very clever, this particular scene broke more than a few Occupational Safety and Health Administration (OSHA) regulations, problematizing a pathway for Atlas to join a safe, professional work environment. Glitch artist Hacer Kun made note of the specific violations.

The company intentionally chose a construction zone as the setting, featuring scaffolding and tools, since Atlas isn’t exactly required to wear steel-toed boots or a hard hat, but they should’ve made Atlas comply with safety regulations like any of its human counterparts.

Originally, the video titled “Atlas Gets a Grip,” Boston Dynamics set up an obstacle course for its robot, ranging from a haphazardly placed piece of lumber to a giant wooden crate standing on top of the scaffolding. This already portrayed a dangerous and unsafe working environment.

This was late pointed out by Hacer who points out a video in reply to the original with all the violations of OSHA.

Atlas’ carefully tightrope-walking across that piece of lumber violated four OSHA rules alone according to the video, including failure to ensure fall protection, provide guardrails, or a walkway that is at least 18 inches wide. Of course, not to forget, having Atlas haphazardly chuck a bag of tools to the human worker also broke plenty of rules, including a failure to ensure “the safe condition of tools and equipment used by employees.”

All these backfired for Boston Dynamics as they just wanted to show off their newest robot and its powerful strength and abilities. But if OSHA were to inspect this work site, Atlas would more or less be fired which is the complete opposite of what Boston Dynamics were attempting to achieve by introducing the robotic assistant to the construction industry.