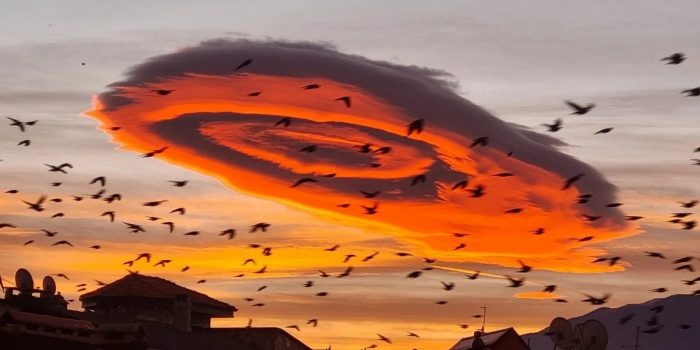 A rare pink-colored circular cloud formation has been seen in Turkey, hovering over the sky at sunrise and featuring a large hole in the middle. People all over the province of Bursa recorded it with their mobile phones and took some amazing photos.

Bursa lies at the base of a mountain range, which makes the phenomenon more likely. The cloud, which was seen from the Kestel, Gürsu, Osmangazi, and Nilüfer districts of Bursa remained intact for about an hour.

The wave-like pattern is known as a lenticular cloud. Lenticular clouds get their name from the Latin ‘Altocumulus lenticularis’, which translates to ‘like a lens’. Lenticular clouds are a “strange, unnatural looking” cloud formation, according to the U.K.’s Meteorological Office. These types of clouds form “when the air is stable and winds blow across hills and mountains from the same or similar direction at different heights it can set up a train of large standing waves in the air downstream, rather like ripples forming in a river when water flows over an obstruction,’ it added,” officials said.

Lenticular clouds “look a lot like the traditional shape of flying saucers in science fiction,” U.K. officials said, and “real lenticular clouds are believed to be one of the most common explanations for UFO sightings across the world.” They are known for their curved, flying saucer-like appearance, and are usually found at heights of around 6,400 – 16,500ft.

The stationary cloud, which is the result of an orographic event, is likely to be seen in any geographic area with foehn winds.