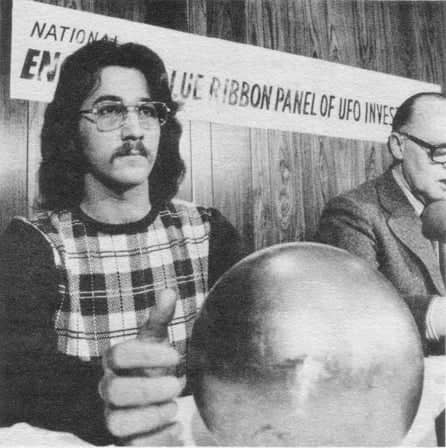 There are a number of things and incidents on the planet that are yet to be explained by science. One such wonder was discovered by the Betz family on their Fort George Island, Florida property. A giant metal sphere, which was first thought to be a cannonball left over from prior battles  later turned out to be something out of this world.

In 1974, a fire destroyed the woodland property of Antoine and Jerri Betz in Fort George Island and among the ruins, they found a sphere they had never seen before.

The sphere had a small triangle etched into it which intrigued the Betz family. It was the size of a bowling ball and weighed 22 pounds.

One fine morning, Terry, the son of Antoine and Jerri Betz was playing guitar and found that the sphere reacted to the sound of the guitar and made a throbbing noise which scared the family dog. Things took an even odder turn when they were sitting on the floor and rolling the sphere towards one another. When it was sent in one direction, it would change direction midway and head back to the person who rolled it.

The family assumed that like superman, it was affected by solar radiations as it moved more intensely when the sun was shining brightly. Terry started experiments of his own. It rang loudly when it was hit with a hammer and rolled around his room when shook.

To stop it from rolling around the house, the family placed the Betz sphere in a box and brought it out, only to show family and friends who were fascinated by it.

All this attention to the Betz sphere alerted NASA as well. Their initial studies showed that the steel sphere was not manufactured or tampered with.

Military officials asked for the sphere to be taken back to their labs for further research and the Betz family declined. The Military, doing what they do best, seized the sphere and took it with them. The sphere was brought to Jacksonville Naval Air Station and X-rays could not penetrate to the center. They also found out that it could withstand 120,000 pounds of pressure per square inch.

The navy used a 300 kilovoltage X-ray and it showed two items surrounded by a halo of materials and saw that there were four magnetic poles: 2 positive and 2 negatives. One researcher, Dr. Carl Wilson, found that the sphere contained radioactive elements and believed it defied the laws of physics. Dr. J. A. Harder, who also conducted research, said the elements inside the sphere were heavier than anything known in the scientific community.

Ever since the discovery of the Betz sphere, people have come up with a number of theories of their own but the scientists are still baffled and have no idea where it came from and what it does. No one knows where the Betz Sphere is placed or stored, but it is still puzzling space buffs from all over the world.