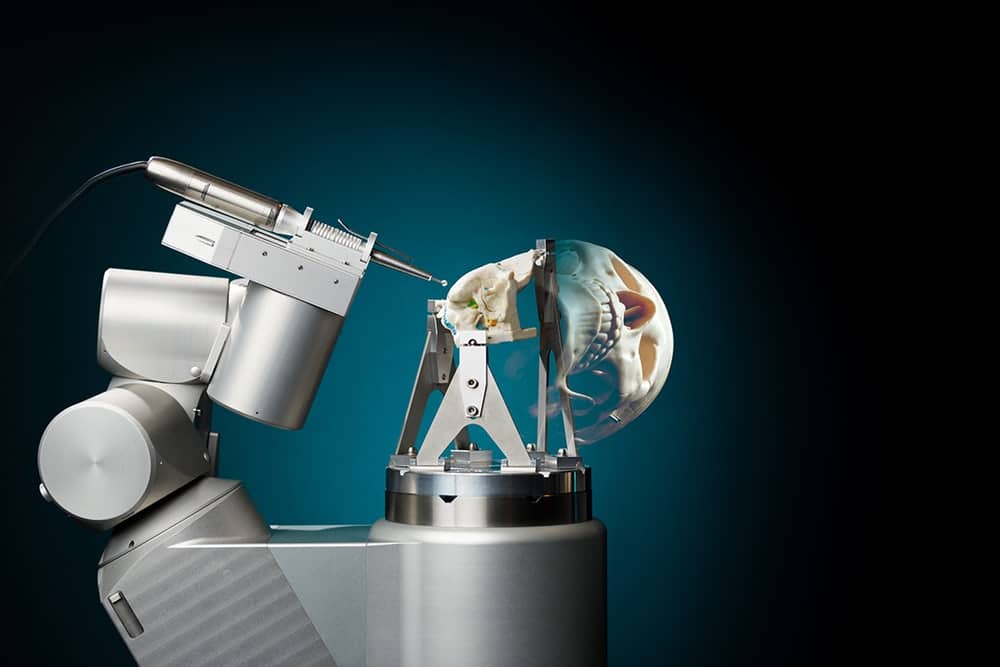 Drilling into the skull is a risky task because of the sensitive structure which is spreading around the human head. Doctors take special care during the surgery be it their fear of striking nerves, major veins or arteries. A new robot built at the Eindhoven University of Technology (TU/e) will help in making the surgery easier for the doctors. It will help in sharing the load, cutting down operation and recovery times while the procedure will be made safer and cheaper. The new robot is a CNC milling machine which is equipped with a surgical drill and seven different axes of motion. This allows the drill to perform its task from different angles. The developers say that the flexibility of the robot doesn’t compromise on its precision. The precision of the robot is maintained at sub-millimetre level by its stiffness, low weight and low amount of reverberation. The robot is named as the RoBoSculpt. It is guided by a set of programmed instructions from the surgeon and CT scans of the patient’s skull. After marking which sections of bone is desired for removal, the head is held in position and the robot automatically drills a cavity which is required. Jordan Bos, the designer and PhD student at TU/e, has carried out technical tests so far. He said that the machine is capable of working fast and accurately than humans. This means that the chances of complications are low and recovery time will be short as well. The team said that the RoboSculpt will start working by lending a helping hand to surgeons at first. It will handle the preparatory work for a cranial operation while humans will still be handling the critical part. First pre-clinical tests of the robots are planned later this year. Later on, the robot will be able to perform its first surgery within five years. Dirk Kunst, skull-based surgeon at Radboud University Medical Center said, “This is an important step towards the operating room of the future. RoBoSculpt is an optimal collaboration between the surgeon and the machine; they really complement each other to achieve the best results for the patient.’