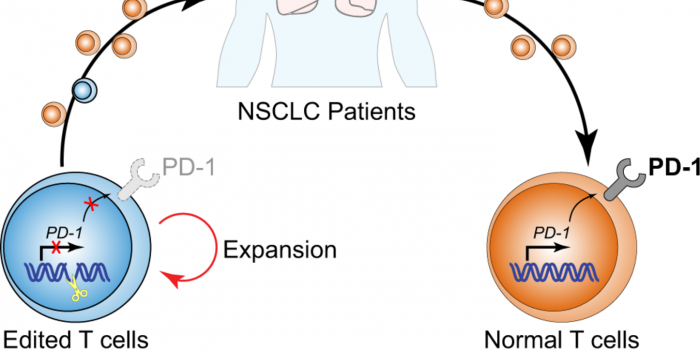 Gene-editing technology CRISPR has been used to remove genes from immune system cells to make them better at fighting cancer. Recently, PACT Pharma and UCLA have used CRISPR to remove and add genes to these cells to help them recognize a patient’s specific tumor cells.

“It is probably the most complicated therapy ever attempted in the clinic,” study co-author Antoni Ribas told Nature. “We’re trying to make an army out of a patient’s own T cells.”

“If [T cells] see something that looks not normal, they kill it,” lead author Stefanie Mandl, who serves as CSO of PACT Pharma, told Nature. “But in the patients, we see in the clinic with cancer, at some point the immune system kind of lost the battle and the tumor grew.”

Scientists have developed “CAR-T cell therapies” to help T cells be better at finding proteins found on the surfaces of blood cancer cells and targeting them specifically.

However, each person has a different kind of cancer which makes it difficult for the existing CAR-T cell therapies to be effective.

To make the CRISPR boost work, researchers took blood and tumor samples from 16 patients with solid tumors in several parts of their bodies. They used genetic sequencing to find samples for mutations that were present in their tumor cells but not their blood cells.

“The mutations are different in every cancer,” said Ribas. “And although there are some shared mutations, they are the minority.”

Afterward, each participant’s T cells were searched to look for ones with receptors likely to recognize cancer mutations.

Later biopsies found that up to 20% of the immune cells in the patient’s tumors were the engineered T cells, suggesting that those cells were in fact very adept at recognizing cancer.

The results continued to be positive when patients were monitored later.

“We just need to hit it stronger the next time,” said Ribas.

“The fact that you can get those T cells into a tumor is one thing. But if they get there and don’t do anything, that’s disappointing,” Bruce Levine, a professor of cancer gene therapy at the University of Pennsylvania, who wasn’t involved in the study, told WIRED.

Another hiccup is that the treatment is expensive, complicated, and time-consuming — it took the researchers a median of 5.5 months just to identify the mutations to target with CRISPR after sequencing a patient’s cells.