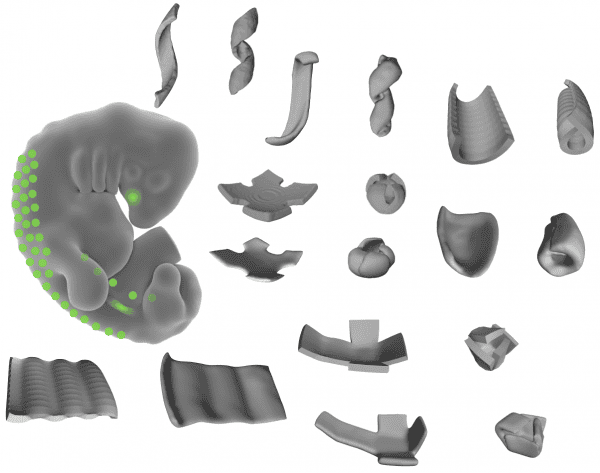 Bioengineers from the University of California, San Fransisco (UCSF) have discovered a way to make 3D shapes from living tissue. They manipulated active cells from both humans and mice and made them fold themselves in ways that occur during the natural development.

Senior author Zev Gartner, part of the Center for Cellular Construction at the University of California, San Francisco said, “Development is starting to become a canvas for engineering, and by breaking the complexity of development down into simpler engineering principles, scientists are beginning to better understand, and ultimately control, the fundamental biology. In this case, the intrinsic ability of mechanically active cells to promote changes in tissue shape is a fantastic chassis for building complex and functional synthetic tissues.”

The researchers used a method known as DNA-programmed assembly of cells (DPAC). This is a unique method and is used in 3D cell-patterning technology. Using this technology with a combination of active cells, they were successful in creating a tissue template which has the ability to form itself in ways organs develop during natural growth.

Alex Hughes, first author and postdoctoral fellow at UCSF stated that “We’re beginning to see that it’s possible to break down natural developmental processes into engineering principles that we can then repurpose to build and understand tissues. It’s a totally new angle in tissue engineering.”

The team only built simple models to predict the behavior, development and folding patterns of these cells and tissues. The team was surprised to see that the cells behaved exactly as predicted and this allowed them to build living constructs from developmental folding and shape-forming behaviors.

This technology has a number of far-reaching applications and one day we might be using mechanical tools with biological origins. Making 3D shapes from living tissue could also be a huge step for soft robots as newer robots are incorporating more and more biological elements.