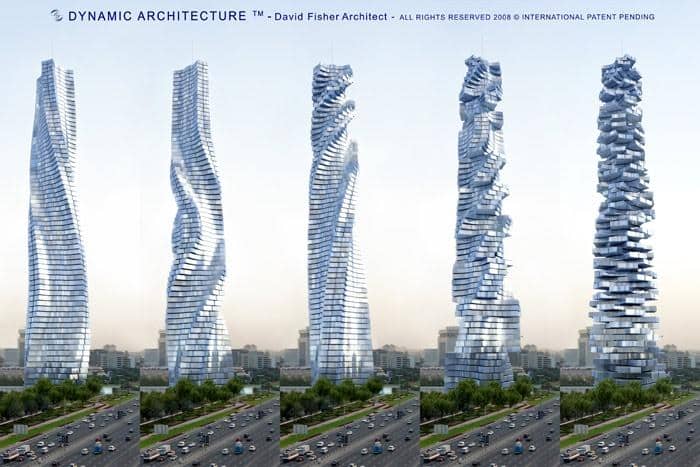 Architects are usually blamed for not knowing the line between the fiction and reality as they go overboard in designing up outrageous buildings and structures. You can’t cage in creativity and ambition, but sometimes the Utopian dreams are so far fetched that they are never materialized. Here are ten examples of such structures.

The Dubai City Tower or the Dubai Vertical City was announced on 25 August 2008. It was supposed to be 2,400 m (7,900 ft) tall, the third tallest building in the world ever planned after the X-Seed 4000 (4000 m) and the Ultima Tower (3218 m). Although there are no signs of its construction for now, if it is ever constructed, the Dubai City Tower will be almost three times the height of the Burj Khalifa and seven times taller than the Empire State Building.

The rotating tower was designed by architect David Fincher but reportedly has been canceled due to feasibility and cost issues. The building was made to allow each floor to turn independently using merely voice recognition and give ever changing views to the residents. You can read more about the design in our article here.

The Shimizu Mega-City Pyramid was planned to house around one million people and was planned to be built like a floating city in Tokyo’s harbor. The pyramid was proposed as a solution to Tokyo’s overpopulation, but the design’s weight is too much for any construction material to sustain, leading to the idea’s doom.

The design was proposed by Vincent G. Raney’s in 1945, and this was supposed to be the United Nations headquarter in San Francisco’s Twin Peaks neighborhood which lost to New York.

The 3,200 ft (975 m) high skyscraper was designed by Kobi Karp Architecture, 2010. The self-sufficient structure was bid to cost $22 billion and had a planned amusement park, an observatory, a museum, a trade center, a rotating sky-lounge, a hotel, a shopping mall and even a marina.

The 3,445 ft (1050 m) tall Azerbaijan Tower, was designed in 2012 and was supposed to be built in Khazar Islands, near Baku, Azerbaijan. The building, if and when built, would be the centerpiece of the Khazar Islands, which is an artificial city consisting of 41 artificial islands spread on 3,000 hectares over the Caspian Sea.

The Russian tower was started on 2007 and was planned to rise to 2,000 ft. The project developer halted the construction in June 2009 and said,

“In today’s economy, a project of such scale is no longer feasible for us and can no longer be justified.”

Planned to be located at the heart of Argentinian capital, Buenos Aires, the Buenos Aires Forum is a supposed to be a mixed-use structure using a 3,300 ft (1000 m) tall skyscraper as a centerpiece and is designed by Julio Torcello.

The 2000 foot structure only had its foundation work completed when construction was halted in 2008 because of recession. Here is the full video released when the idea was first pitched showing the magnificence of the design.